The local government leaves us in the dark and in the shit.

Let me explain: To win the last local election the ruling party supplied benches and street lights. Than came the crisis. Now 90% of the public lights are switched off in the early morning to save some money. It’s a great idea as this could be a new tourist atraction. At 5 am on a clear night the star studded sky is simply magical. So the ayuntamiento first enlightened the “vecinos” but than left us in the dark – typical politicians – isn’t it?

Just to make sure there are no health and safety issues, it may be a good idea to start putting up new street signs when entering our ayuntamiento of Sober.  At least until someone finds out how to make the new light bulbs – “a present from Angela Merkel” – actually work.

This could be – the major new tourist attraction  – clear,  star studded nights – single handed helping to turn the negative tourist trend here in rural Galicia and resolve us from the darkness … without turning the lights on ….

Unfortunately in our case the field offering the best all round view is also near the non functioning “depuradora” (mini waste water treatment plant).
One could suspect that EC money was used  to support a grand project for a small village.

A bit of over engeneering, advanced planning and the creative use of EC money could have ensured that the future in Mer is bright not just black and white. 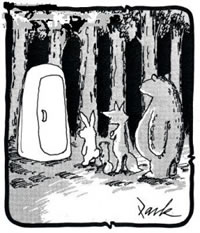 BUT the gigantic plan, probably hedged in an obscure office in the bowels of the ayuntamiento, simply solidified, due to lack of water and usage and now is a smelly reminder of the grandure of planning for a big bright future with foreign aid, regardless of the actual local conditions and requirements.

Don’t get me wrong I love living here, it is just after a while you start noticing avoidable shortcomings – which here in local Spain tend to center around the local funcionarios.

Because even the local government has to save contracts for people who actually work where not extended whilst the chiefs are still there.

Oh, and this may prevent a visit to the local office for renovation – it is also in this building – but than only Sober actually has such an office to distribute money from an EC grant, all other ayuntamientos just deal with it during planning applications.

Some ancient history in form of petroglyphs on a rockface near the road have come “on-line”. From Sober head for Rosende than Anllo. Pass through Anllo and at the cross roads turn right to San Esteban. Along this road with great views you’ll find :

The explanatory sign is in local dialect and actual spoken languages – Castillan and English – !!
At the end of this road you’ll hav eto park the car and cross the river on a foot bridge. Head up to the right to the railway tracks and you find a nice bar where you can sit outside and watch the train(s) go by – well if you time it right for the two trains in the evening, that is.

Did the ancients need permits to do this???? Till next time – Expat