It is interesting to observe for oneself that only if you had things you may miss them, if you had not had them you don’t.

Nearly all of us living above the “threshold” take a warm(ish) and dry house / flat for granted. Turn a litle knob and presto it’s warm. 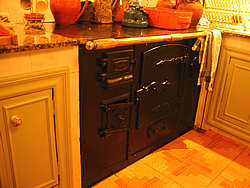 Here in Galicia it is/was back to basics. Large houses are for sale that don’t even have a bathroom. Heating is something that happens by accident usually in the kitchen. The “cocina economica” is still very often the only place where it is significantly warmer than the ambient temperature.

After our first month in February we plugged in a wood burner to have at least two heatable rooms and used a gas jet to dry and heat the rest of the house.

These times are easily forgotten when spring and summer sets in. Cool shady rooms areÂ “the thing”.
It’s a bit strange at 35C in the shade to order an oven that blasts out 27Kw. 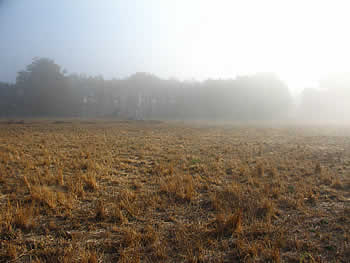 But ever so suddenly autumn (otono) arrives and nights get perceptively colder.
Although we had shown and arranged for our “fontanero” to come in and put in radiators and pipes (lots of them) we faced the not unusual delay.

We started blaming it on “The mists of Canabal”. The nearly daily occurrence of thick fog in the lower valleys which need to be negotiated to come up to our village.

We looked out of the window and seeing “The mists of Canabal” we joked -“He won’t come today – He’s lost”. 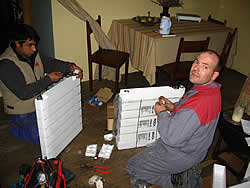 Finally one day Pablo arrived. Unloaded lots of material and simply took over the whole house. We had to fight to keep one room and one bath room not obstructed by radiators, pipes, connectors and other bits and peaces.

A weekend with a “Metanza” (killing of pigs) got in the way, but anyway it was foggy in the morning. 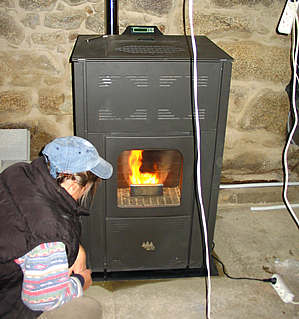 Finally, on Friday, we got the thumbs up and we started the pellet oven. 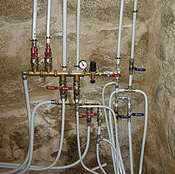 After rectifying some leaks and a flooded electronic by gas jet, the oven fired up to full capacity.

It is indescribable the feeling of radiators becoming lukewarm. The feeling of sheer power and heat being transferred through a maze of pipes, just for convenience. 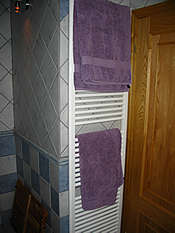 A towel heater that warms up without being plugged into the electrics. Bliss………..

Sunday we went for a drive on the lookout for a place to eat (without reservation). After a nice but late lunch we returned to a warm house.
No rushing about and lighting fires before the first layer of cloth is taken off.

Than, just because we could, we converted the lounge into the equivalent of a sauna. Heating on full blast and wood burner on full blast – yes bliss……
Did we think we could sit in a t-shirt in winter in a room in our house and do nothing but watch TV? Believe me we had some serious doubts.

Back to reality. Yes, I had some doubts if the whole thing would work. Theoretically yes, but practically? 27Kw sounds a lot but 30 meters pipe runs are a lot too. There is this remote radiator, would it get warm? Will the pump be OK?

It does work beautifully. The oven takes 2 sacks of pellets at 15 Kg’s each.
It munches through quite a lot on full blast, but the middle or lower level will keep it running for 24 h’s on about 1Â sacks of pellets.
It is enough to have basic warmth in the whole house, even when frosty outside.

There is litle ash. When one burned 150Kg’s (10 sacks) about a cup full is easily disposed of. The heat exchangers are cleaned from the outside which one should do once or twice a day. No need to power down the system.

It’s just a great solution for a situation like here.

So here is to central heating ….

From a warm loungeÂ  Expat