Time flies. As the only running Spanish ferry company decided to close all sailings we took the decision to drive – all the way. On Sunday we had an invitation to dinner at very good friends in Hamstreet but we where eager to go to our new home. So we decided to take the Eurotunnel to Calais that night stay in a hotel there and start our drive on Monday.

Having successfully overslept we started on Monday at about 10am.

I was begging for green traffic lights as Barbara had to break with her left foot having torn a ligament the day before in her right knee. Having no real feeling for breaking with her left foot asÂ a passenger it was like Formula1 acceleration followed by rapid deacceleration. Now I know what safety belts are for. The drive to Bordeaux was surprisingly quick, the motorway near the coast is finished. Having skimped and bough an old road atlas this was the only thing that took us by surprise.

The drive is interrupted by pay stations and surprisingly good roadside stops.

Arriving in Bordeaux we where greeted by darkness and snow.

When we eventually foundÂ at the hotel we had pre booked, we had a dejavu. We used the same chain a few weeks earlier in the Netherlands and the room there was exactly the same.

Again I learned why so many peopleÂ like to stay inÂ hotel chains. OnceÂ one has learned where to find the mini bar, its always in the same place.

Tuesday saw us going down to Biarritz. No one there it’s still too cold. Crossing into Spain we drove along snow covered mountains and lovely beaches.

It is important to start looking out for congregations of lorries and cars as those indicate a suitable stop for sustenance. Menu del dia is still about 8 Euros, all in.

A good lunch saw us through to Oviedo and the long and adventures search for Ikea started.

Knowing your way around a huge shopping center in the UK does not prepare you for the centro comercial near Oviedo. It boasts some interesting oddities. There seem to be only one way in but three different ones out and the huge Ikea sign is nowhere near the actual shop, to name a few.

Once you found it it’s exactly like you expect it to be. Same as in Germany, Netherlands or the UK. Why are we so obsessed with it?

But finding Ikea was not the only challenge, finding the hotel was another venture that took us to every service station nearby until by triangulation we could actually find the place.

The next morning we spend some happy three hours furnishing our new house in our minds and than set off for the last 350Km. 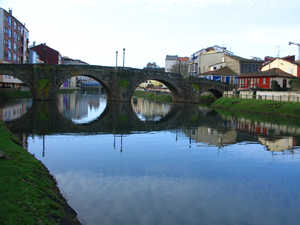 Monforte greeted us with sunshine and simply stunning views across the country side.

After that fog settled in, but that is another story.